With everything loaded up and work one day behind us in the rearview mirror, our trip south toward the Smoky Mountains began on a sunny Thursday afternoon.

After keeping pace in my mostly aerodynamically challenged vehicle along the autobahn of Central Kentucky, the traffic eventually began to calm and the highway became lined with Redbuds seeking the spring sunshine. A few hours of taking in the sights of the approaching season had us stopping for groceries just outside of Knoxville in Maryville, Tennessee. Time to load up on that special mix of healthy and unhealthy treats and things that usually only taste good when camping. But just to make sure we wouldn't miss any calories, we had to stop for a pizza in Townsend just before going into the national park.

The first evening was spent driving along Little River Road looking for something to photograph. The hunt was on and it didn't take long to find the first scene I wanted to capture. As I now scratch around my ankle a bit, I must warn you that there is a lot of poison ivy along that stretch of the river. You can take great measures to avoid it, but sometimes getting the photo demands a little too much attention. So much for multi-tasking during vacation. After getting all I felt I could out of that particular area, we drove back toward the Townsend entrance. I spotted a small creek with several white trillium nearby and just had to stop. The light was fading and the breeze was picking up, but I had to see what I could get. Spending some gymnastic time slipping on wet rocks and trying to set up a tripod amongst a heap of fallen tree branches as it was getting dark, I gave it my best shot. Satisfied with what I could get under the circumstances, we headed back to the Element. While loading up, I noticed the spring peeps had started a chorus in the final light of the day. Being parked near a concave shaped cliff wall, the little frogs had a natural amphitheater of which they were making the most. The sound was deafening. Seriously. It was intense. I have never heard frogs make noises so loud and so piercing. It was a very cool experience, but I'm glad nobody was making me stay there the whole night. It would have changed me. 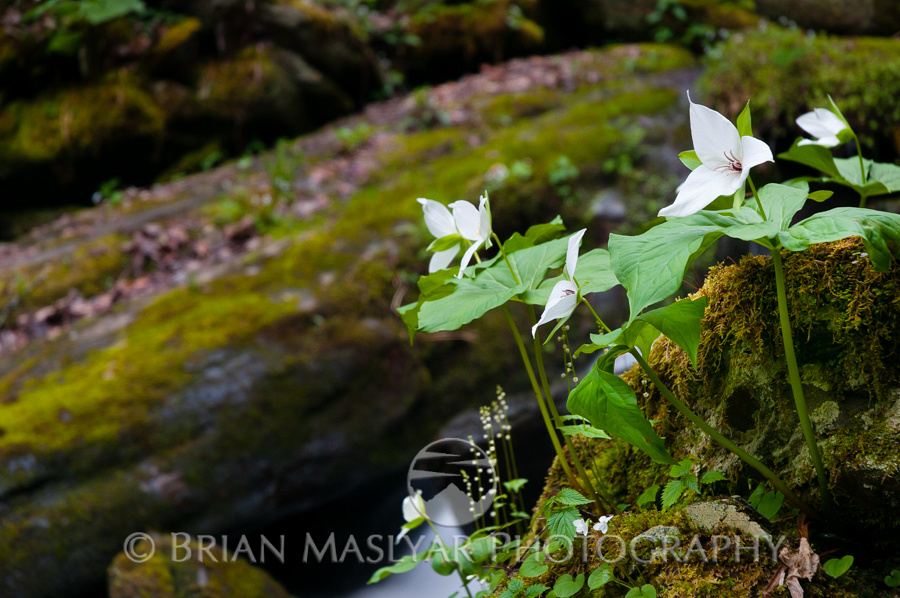 Shaking that little sonic memory from my head, it was time to find a campsite up at Cades Cove. Pulling into the campground area, it was hard not to notice that only one loop was opened. It took a few laps of driving around, with some exercising of my vocabulary, to come to the conclusion that there was no room at the inn and that one of the many unoccupied campsites from a closed loop was not going to magically migrate and become available to me for my sleeping pleasure. Two choices remained. The first was to drive into Townsend and get a spot there. I came to find that few campgrounds there offer tent sites and those that do charge as much as a cheap motel for the night. Back into the Element for a drive to Elkmont campground. Tired from driving that day, the spring peeps came to my rescue as I passed their amphitheater once again, gaining another dose of auditory over-stimulation. Was that just giving a shout-out to my peeps?

It felt like it was really, really late when we pulled into our chosen lot of paradise. Bags and storage bins were shuffled about as Maarit and I prepared the cozy (cough) interior of the Element as a surrounding of our dream filled sleep to come. If only. Let's just agree that some sleep was had and the rainy Friday morning came somewhere between too soon and just in time. 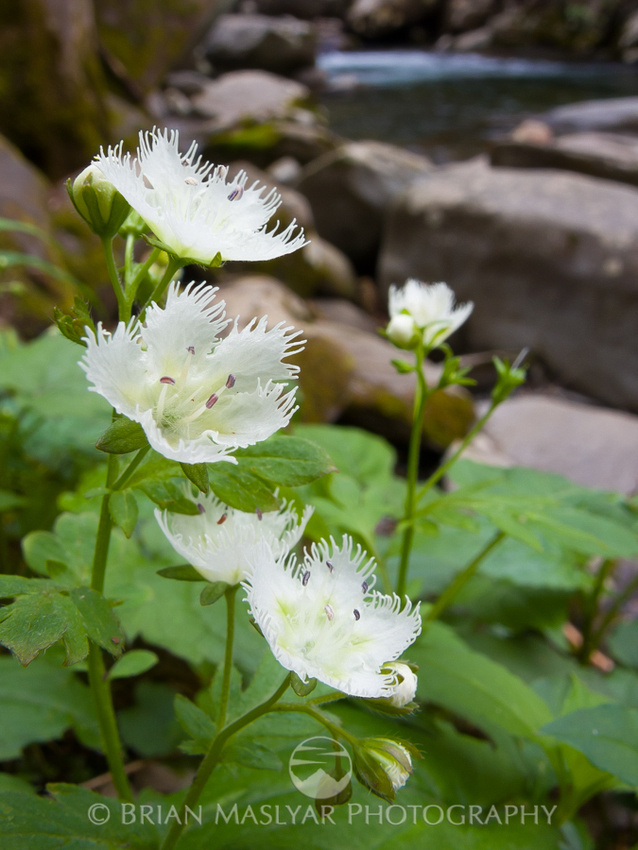 As the weather forecast promised, Friday did start out rainy. But luckily, it wasn't a washout as predicted. Once we got moving, we made the drive to the Greenbrier area of the park. This is one of the prettiest places at anytime of the year, but spring grants the viewer a visual feast of wildflowers along the Porters Creek Trail. I was a little surprised that there were not many cars at the trailhead as this area does get a lot of attention. But, there were two passenger vans. I have heard of clown cars, but not of clown vans. How in the world approximately one hundred college biology students fit in those two vans to make the drive to this trailhead to coincide with my hike will forever remain a mystery to me. At least there were more flowers than people. And although there were not many wild iris in bloom yet, most everything else was in full show. 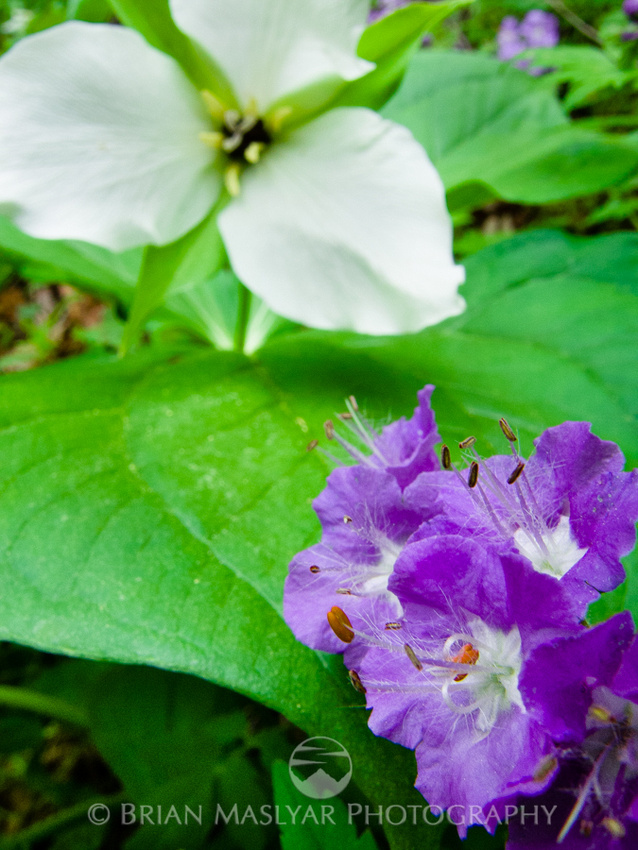 Well, you can hardly go all the way to the Smokys and call it a proper vacation without popping your head into Gatlinburg for a few minutes. Since it was supposed to have rained all day, we had made reservations at the fabulous Motel 6. When I first looked at the place online, it was going for nice forty dollars a night. I guess while I was making my decision the prior week, their level of pride doubled as well as the price. Then again, you can't really put a price on a shower that oscillates between giving you second degree burns and then soothing those burns with icy relief. But, the real reason we came to the biggest tourist trap east of Vegas was to snag some butterscotch Sugarlands Shine moonshine. After a nice dinner at Cherokee Grill, we wondered down to the tasting room for a quickly achieved buzz and a few jars of the wonderful tasting libation just before walking back the room.

Up and at 'em. After an easy morning in Gatlinburg, it was time to head back to Cades Cove for the start of a longish hike. We made a quick stop at the Surarlands Visitor Center before starting the drive to the campground at the Cove. It was about at this time I started cursing my luck. If only I had not squandered 30 seconds at some point that morning. If I could have been just a half minute faster from the time I opened my eyes, I would not have had to drive behind the slowest person to ever cruise on Little River Road. You think they might have gotten the hint to pull over with forty cars stacked up behind them. But, no. Nope. They never pulled over. They never turned. They never deviated from their goal, the same goal as mine, of Cades Cove. It did give us plenty of time to marvel at how much green now appeared in the trees from just overnight. 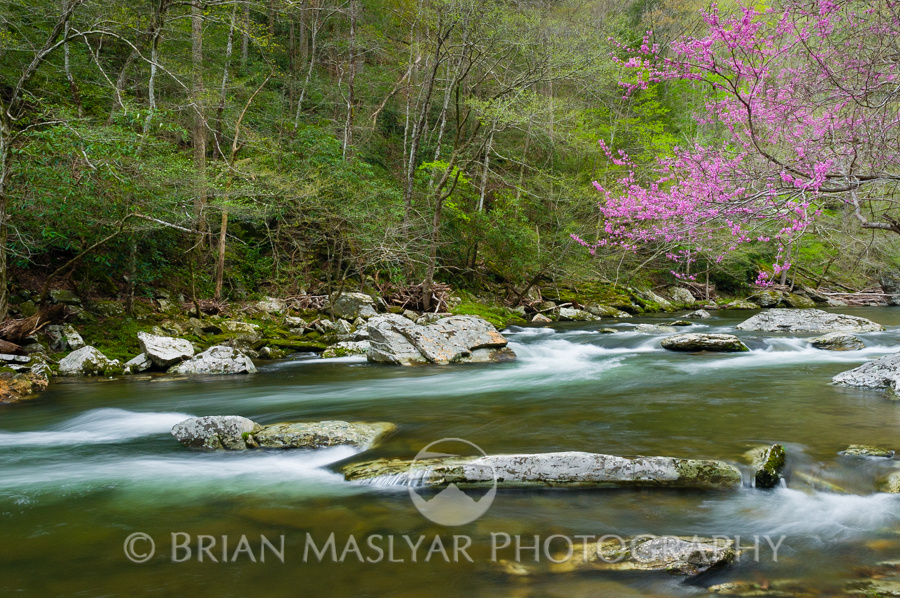 Redbud along the Little River.

After what felt like an eternity, we finally made it to Cades Cove campground. This time, however, every loop in the place was open. We could choose anywhere as our campsite before we hit the trail for the day's hike. We picked a nice one in the back with hardly a soul around before we strapped on the daypacks and headed up the Anthony Creek trail toward the Appalachian Trail. Thanks to that loss of 30 seconds, we were running a little behind for the amount of daylight we had left to us.

I had done this loop about fifteen years ago and I can't begin to describe the amount of memory distortion this hike revealed to me. I thought I remembered how the trail would look, but it was if I had never been there before. Hardly a single image I had in my mind could be found along the trail. It's a very strange phenomenon. I can't wait to see what it looks like next time. In any case, the forest floor through which the trails wandered was almost continuously blanketed with wildflowers for the whole twelve or so miles. From Anthony Creek and Bote Mountain trail, we hit the Appalachian trail and followed it to Russell Field trail. Taking that down the mountain put us back on Anthony Creek and out to the campground. We cooked a nice dinner and had the tent ready before dusk retreated into night, as a herd of children noisily played in their family's campsites behind the "secluded" one we picked out earlier that day.

Sunday found us heading toward the Tremont area of the park after a quick visit to Townsend. This was the first time I had driven the dirt road all the way back to it's terminus at the Middle Prong Trailhead. Yes, there are two paths you can go by. One is a dirt road that leads past a beautiful waterfall and the other is a picture perfect trail that will eventually lead up to the AT. We poked about on both trails with no particular goal in mind. The light was harsh, so not too many photos were taken. It was more of a scouting mission. As we were leaving, a few horsemen started up a lively conversation with us. The topics ranged far and wide and their company was most entertaining as we traded stories about places we have been. As the late afternoon light smoothed out, they hit the trail and rode off and we began photographing. A while later, we drove into Townsend for a snack at the Firefly Cafe and then back to Cades Cove to set up camp in an ever increasing breeze. 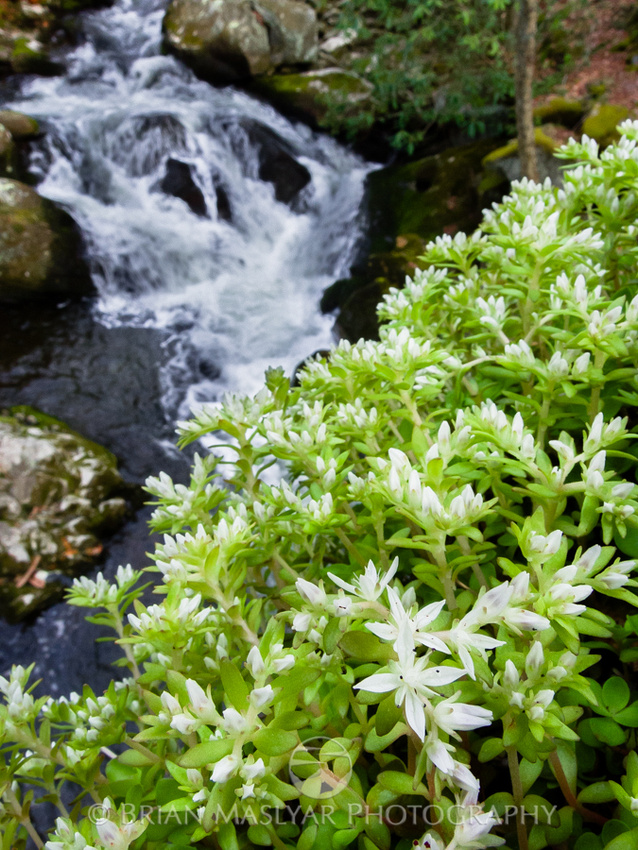 Sometime in very early hours of Monday morning, the wind started barreling down the mountainsides. It sounded like an avalanche as it broke through the trees above us. You could hear it moving about like a wild animal, sweeping left to right amongst the treetops. Occasionally it would run across the ground and plow into the side of the tent, bending it inward upon me for several seconds at a time. How cozy, but thumbs up on the Big Agnes Copper Spur tent. It held up nicely even though two tent pegs were almost completely ripped out of the ground. After a few sleep, get swatted in the head, wake cycles of wondering what it would be like to blown into OZ, the beast wore itself out and we woke to a calm sunrise. 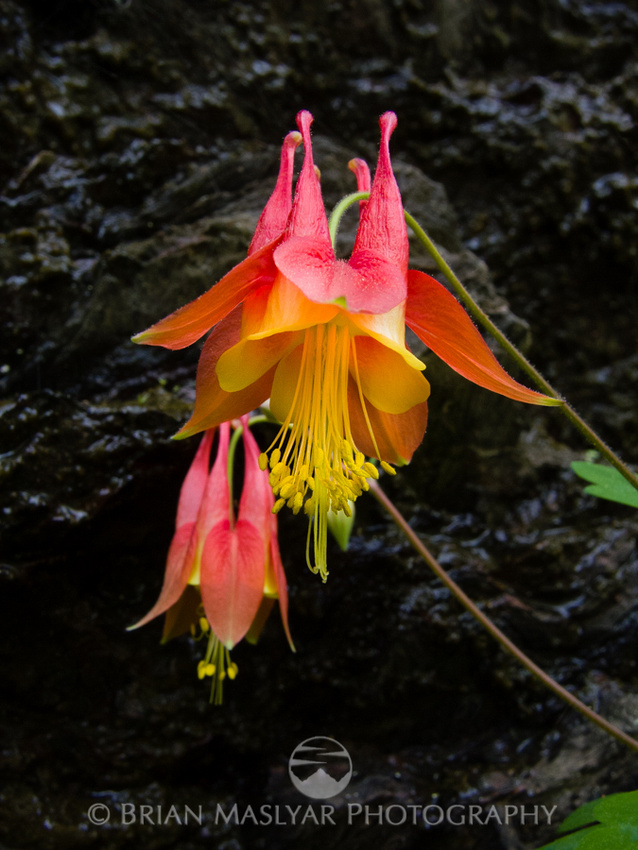 Tremont was once again the goal on our last day in the park as cloudy skies provided nice light to photograph some of the scenes I scouted the day before. After photographing waterfalls and making one one last pass down Little River Road, it was time to take a deep breath and accept that this trip was drawing to an end and that we needed to start back toward Lexington. So with new memories of another wonderful spring in the Smokys, that of which I hope don't distort too badly, and a ton of ones and zeros written to a CF card to show for it, we hit the highway and headed north. 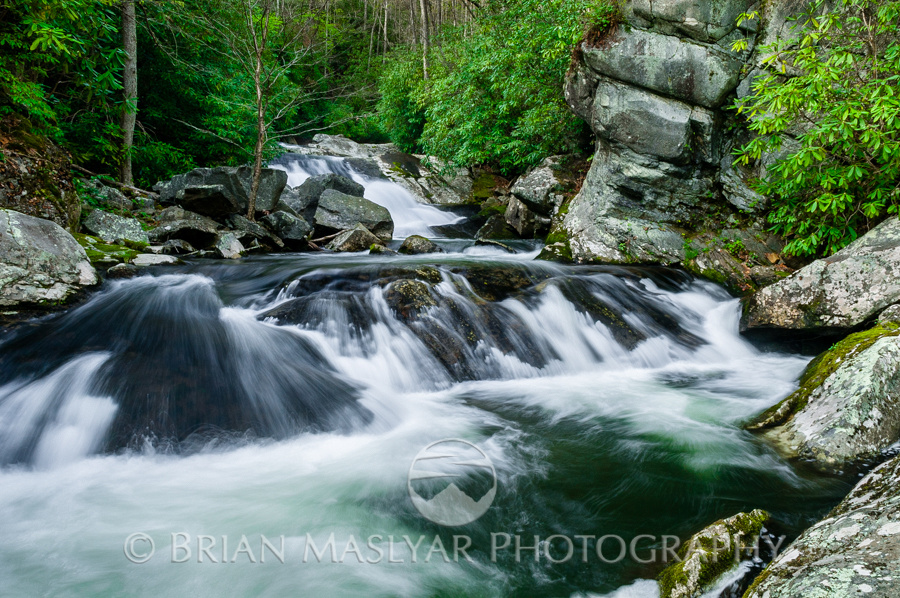